Submerge yourself in the Sunshine State

With about 7,000 kilometres of coastline and thousands of islands and reefs, there is a whole new world lying beneath the surface of Queensland’s waters just waiting to be discovered! Experienced and total amateur divers alike can enjoy exploring the underwater wonderland with scuba diving tours and lessons departing from Queensland’s coastline. You could be swimming alongside whales during their migration, exploring the coral gardens of the Great Barrier Reef, watching a live shark feed and meeting beautiful turtles!

The Gold Coast has never been a go-to for discovering what lies beneath the surface, unless it’s a boat ride to Stradbroke Island. Just because the Gold Coast isn’t famous for colourful coral or exotic marine line, doesn’t mean it’s not an option. Kirra Reef Dive Site, not far from the iconic Kirra Beach, provides an interesting dive experiences amongst rocky outcrops covered in kelp fronds. Swim between the rocks and find an array of hidden gems throughout the reef. Smaller marine species like octopus, cuttlefish, nudibranchs and flatworms are regulars at Kirra Reef however larger species like stingrays, eagle rays, wobbegongs and blind sharks are frequent visitors too.

Off the coast of the Sunshine Coast is one of the best wreck dives in Australia, the Ex-HMAS Brisbane. The 133 metre Charles F Adams Class DDG served the Royal Australian Navy for 34 years before being decommissioned in 2003 for sinking in the Sunshine Coasts waters – creating the phenomenal dive site it is today. The sunken vessel is only 2.9 nautical miles off shore, making it easy to access at any time of the year. An abundance of marine life has inhabited the ship and now large bull and eagle rays, angler fish, lion fish, blennies, nudibranchs, sea hares, squid and schools of fish like red emperor, snapper and yellow tailed king fish call the wreck site home. Not only that, an octopus has claimed a pyrotechnic tube on the deck as his home, huge Gropers dominate the bow and a turtle has chosen the aft funnel as his home. Both hard and soft coral are starting to form in and around the wreck too! Dive into one of the seven wonders of the natural world

Dive beneath the surface of the world’s biggest aquarium, the Great Barrier Reef! The UNESCO World Heritage reef is home to a kaleidoscope of colourful corals, exotic fish and fascinating marine life. The reef is huge, covering roughly the same area as the entire country of Italy, or 70 million football fields! Stretching across more than 2,000 kilometres, from the Fraser Coast all the way to the very tip of Queensland into the Torres Strait, there’s so many different places to dive into the Great Barrier Reef from.

The most southerly island of the Great Barrier Reef is Lady Elliot Island. The picturesque coral cay island is surrounded by phenomenal reefs that house some of the best dive spots in the world. International dive regulator PADI has even rated Lady Elliot as one of the best places on earth to dive, especially with manta rays! Lady Elliot is a part of a highly protected zone of the Great Barrier Reef, so the reefs that surround the island are picture-perfect and completely untouched. Most of the dive sites are close to the shore and easily accessible and all of them have an almost endless abundance of marine and coral life. Diving at Lady Elliot Island you’re likely to see fish species such as lion fish, coral trout, barracuda, cardinals, anemone fish, scorpion fish, rabbit fish, red throat, spangled emperor, angelfish and the unique gnome fish, as well as shrimp, wobbegongs, moray eels and the very frequent manta rays. Although Lady Elliot Island is only accessible by air, it is well worth the flight. Flights to the island depart from the coast of Queensland at Bundaberg, Hervey Bay, Brisbane and the Gold Coast.

The Great Barrier Reef is literally on your doorstep when you stay amidst the Whitsundays Islands. A trip to the northern island of Hayman to dive in the pristine Blue Pearl Bay is a must. Blue Pearl Bay is renowned for its impressive coral and fish life, including the giant resident Maori Wrasse, in both the deep and shallow waters. A diverse world of marine life call the Blue Pearl Bay home, including anemone fish, angelfish, Maori wrasse and other tropical fish species. An abundance of different coral species, both hard and soft, in all the colours of the rainbow surround the island too. The shallows off the southern beach is where you’ll find the best coral, however the southern side, near Castle Rock, offers the most interesting dive site. The shallow coral ledge drops off about 10 to 15 metres with many narrow canyons and caves to venture through that are home to some fascinating coral. 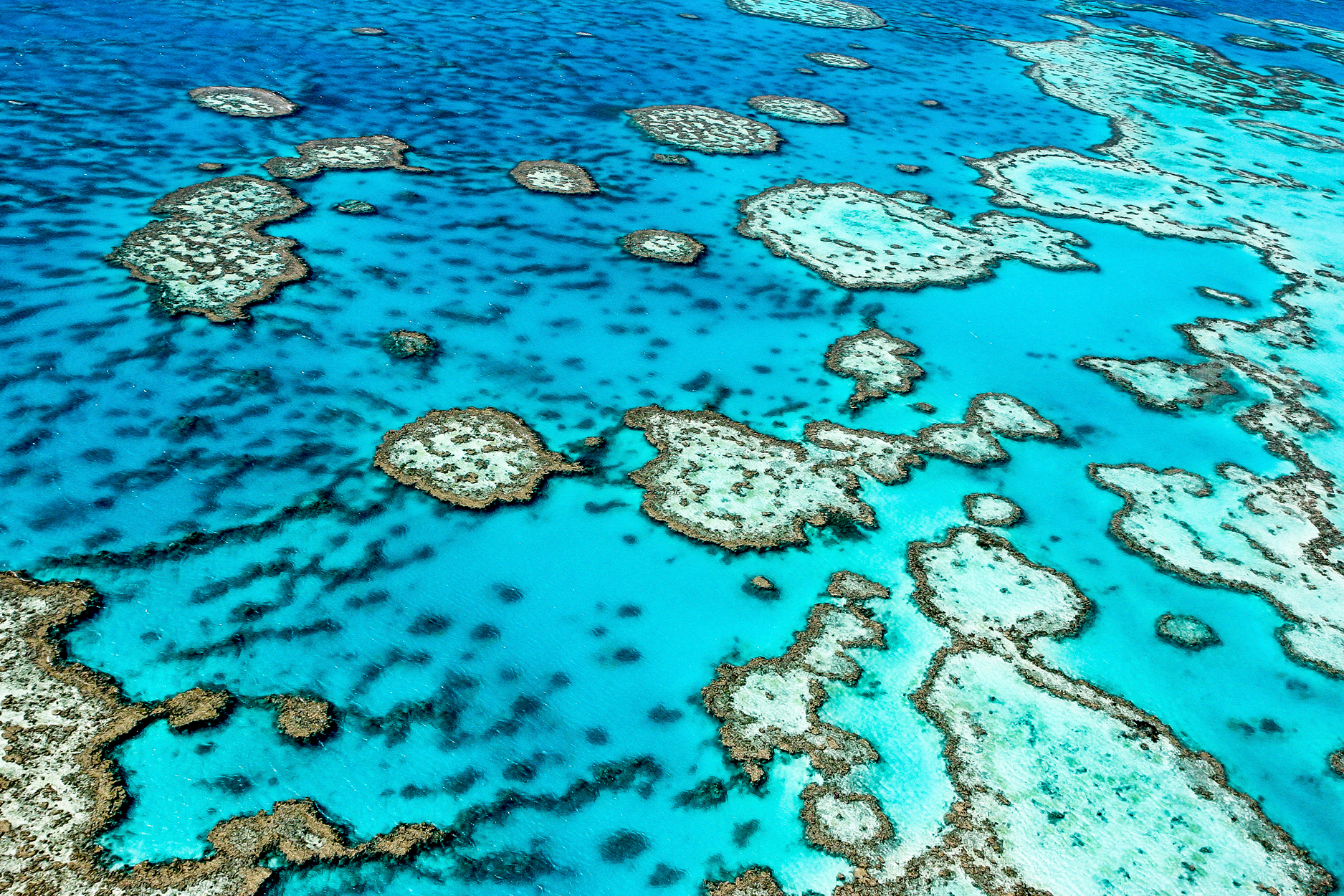 Tropical North Queensland is the number-one destination for discovering the Great Barrier Reef. From Cairns, there are many tours that take divers to the best spots of the reef. One of the top reefs to explore is Flynn Reef, on the outer areas of the Great Barrier Reef. The perfect place for finding nemo, Flynn Reef is home to an abundance of marine life. Large fish species, such as dogtooth tuna, mackerel and barracuda, are frequent visitors to the reef, as are a range of colourful reef fish like the coral cod, butterflyfish, parrotfish, anemone fish, wrasse, rabbitfish and sweetlips. Shark species, mostly whitetip reef sharks, are seen quite often too. Another well-known dive site out of Cairns is The Cod Hole. This is one of the most famous dive sits in the world, thanks to the giant potato cod that call the waters home! Divers have been diving here for at least the past 30 years so the group of resident potato cod have become accustomed to divers over time. These giant fish don’t hesitate to approach you very closely as they are used to be hand fed at the site. Despite that the giant potato cod can reach up 100 kilograms, these friendly giants will do you no harm. The Cod Hole Dive site is a part of the Ribbon Reefs, so why not explore the colourful chain of individual reefs too? The Ribbon Reefs stretch along the north coast and most of the reef out from Port Douglas is made up of them. North-east from Port Douglas, Agincourt Reef comprises of a number of small ribbon reefs and is situated along the very edge of the Great Barrier Reefs Continental Shelf. This reef is home to some of the most vibrant and unique aquatic animal and plant life in the world, making it one of the most popular diving destinations in the whole Great Barrier Reef. The outer reef location allows for vibrant and unique coral gardens to form as well as frequent visits from species of sharks, stingrays, turtles, whales, groupers, cods, Maori wrasse and parrotfish.

Whether you’re an experienced diver and a total newbie to the scuba world, discovering the underwater wonderland of the Great Barrier Reef is probably on your bucket list. My Queensland Holiday Experts can help you organise the perfect Queensland holiday, without missing out on fantastic experiences, like diving in the Great Barrier Reef! With thousands of kilometres of coastline, hundreds of individual islands and thousands of separate reef systems, we are sure to find the perfect piece of the reef for you! Get in touch with the My QLD Holiday Experts today to start planning your Queensland diving holiday!